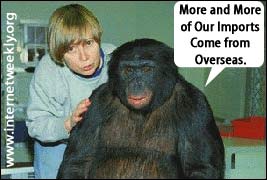 Ape Learns to Speak English by Watching Bush on TV

Atlanta (IWR Satire) – A bonobo, who has grown up among humans, has developed the ability to speak in English, claims a research team from the Georgia State University

Dr Taglialatela reports that: “We haven’t taught him how to speak – he’s doing it on his own.  Kanzi seems to have learned to speak English by watching President Bush on CNN.  In particular, Kanzi likes to repeat the President’s misstatements or Bushisms.  I think Kanzi learned that he can get a lot of attention in the lab by shaking a banana at staff and saying “I know how hard it is for you to put food on your family.”