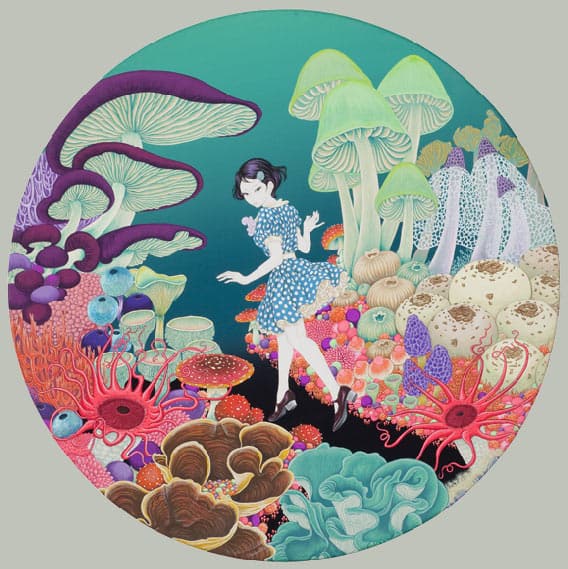 Yuji Moriguchi
These are new images since I last blogged this talented artist.  I was reminded of his work by a post on Facebook by Fuco Ueda

The Gilded Cage by George Hare

Robert Petway – Catfish Blues (1941)
This is the original version of the song covered by Muddy Waters. According to Wikipedia, “He is said to have been an influence on many notable blues and rock musicians, including John Lee Hooker, Muddy Waters, and Jimi Hendrix.”.

Julie London – Gone With The Wind (1955)
I love this version of the song by Julie London.  I heard the song as part of the soundtrack on the Notorious Betty Page.

Jody Miller – Queen Of The House
Funny and surreal Scopitone.

Blancmange – Blind Vision 12″
The used to play this song in the Detroit area on a new music station, but I never got the name of the band until just the other day.  Excellent song.

Mary Magdalene Revisited
I blogged Mary Magdalene back in 2008, but it still amazes me how many wonderful paintings of her exist.

Mary Magdalene In The Cave by Jules Joseph Lefebvre (1876)

“In Love With Lament”

Creature from the Watergate Lagoon

Nixon as the Creature

Neutral Milk Hotel – In The Aeroplane Over The Sea

Ogata Korin
The screens below are amazing.  Also, I was so impressed with Ogata’s Wind God that I use it for my Facebook icon.

Audrey Hepburn and her Pet Fawn
I’d never seen that picture of Audrey before.  She’s so beautiful.  It’s almost unreal.

Snapshots Of The Past
Too funny.

Nura, The Silver Bridge, 1937
These illustrations remind me a little of Odilon Redon.

Trixie Smith – My Daddy Rocks Me

The Flirtations – Nothing But A Heartache

Note: Some of these links were from Facebook, but I can’t remember who posted.  I’ll try to capture the sources better in the future.

cellar-fcp
These are real good.

Ace Brigode: Yes Sir! That’s My Baby
This is the original recording from 1925.

Elvin Jones – Why Try to Change Me Now
Elvin Jones was part of the famous John Coltrane Quartet.

Vashti Bunyan – Train Song
This song was release as a single in 1966.

Don’t Bring Me Down – The Animals
I love the fuzztone.

Come As You Are – Nirvana

Inro’s at the Boston MFA
These traditional Japanese inro cases are beautiful works of art.  There are over 500 inro at the MFA. Inro are what the Japanese used to use instead of pockets.  They are actually several wood boxes latched together with rope or twine and then hung from an obi or sash belt.

Felix Labisse’s Flickr photostream
This is a great set of the French painter’s artwork.

When a Woman Sins (1918, USA) Poster
Theda Bara was quiet a hottie in the early 20th century.  Her nickname was “Vamp” short for vampire.

The Temper Trap – Science of Fear

Bather Arranging Her Hair by Renoir (1885)