One Nation Under Jerry

Parent Alert: SpongeBob is a Sodomite! 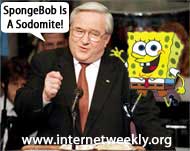 “After repeatedly watching an illegal copy of this sick movie that I downloaded from the Internet, I have found numerous examples of blatant sodomy being promoted in an attempt to recruit innocent children into becoming screaming homos.

Figure 2 is and obvious attempt to promote gay marriage by having SpongeBob carry his so-called ‘bride’ over the threshold.  I, for one, would refuse to pay health benefits to SpongeBob’s fish headed partner.

Figure 3 shows SpongeBob’s flaming gay friend Patrick and his bulbous buttocks with a flag proclaiming SpongeBob’s most recent conquest embedded in the cheeks.

Figure 4 drops all the subliminal pretenses and features a tall semi-nude he-man fellow flexing his appendages in a shameful gay recruiting effort. I must admit after viewing this sensuous scene that I had to apply an ice pack to back of my neck until my prurient interest subsided.

These blasphemies surpass even those of Tinky Winky, Betty Boop, the Boohbahs and Bill O’Reilly combined.

This degenerate movie has also encouraged gangs of homosexual college students to commit misdemeanors by stealing what they believe to be giant SquarePants condoms from atop of Burger King restaurants.

Please spread the truth about this vile movie to your reality challenged friends, relatives and congregations,” said Reverend Falwell to reporters.