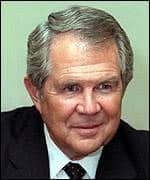 "[Homosexuals] want to come into churches and disrupt church services and throw blood all around and try to give people AIDS and spit in the face of ministers."

"Many of those people involved with Adolf Hitler were Satanists, many of them were homosexuals – the two things seem to go together."

"We cannot stand before God and say we’re righteous when we have the blood of 40 million unborn babies on our hands."

"This country does not belong to the ACLU, the radical left or the communists.  It belongs to God and his people.  I frankly am tired of us being second-class citizens in a land our forefathers founded and claimed for the Lord."

Eric was only doing what the religious far right has been suggesting all along.  Kill God’s enemies.  He was just destroying the evil ones, the liberals, the abortionist, the gays and lesbians.  He should get the Purple Heart, not the gas chamber.

"Just think of the two choices many children in America will face: 1.) To either be slaughtered by the abortionist’s knife, or 2.) Have his life spared only to be sentenced to a lifetime of misery, despair and anguish – forced to live with homosexuals." – Direct Mail, June 1, 1994

"There is no middle ground. For Christians, there can be no peaceful coexistence with those Sodomites."

"I hope I live to see the day when, as in the early days of our country, we won’t have any public schools. The Churches will have taken them over again and Christians will be running them." – "America Can be Saved," January 1, 1979

Please Note: A site, Emily Lyons, incorrectly categorizes this PARODY under "Websites Encouraging Violence" links.  The purpose of this satire was to expose the hypocrisy of the far right’s tacit support for this terrorist, who is no different than Osama bin Laden.  Terrorism against any American is a heinous and treasonous act.  There is no excuse for terrorism ever!

Sympathy for Bombing Suspect May Cloud Search for Evidence

Extremist Chatter Praises Eric Rudolph as ‘Hero’; Some Messages Call for Violence in His Name

Is Terrorism Tied To Christian Sect?

Is Eric Rudolph a ‘Christian terrorist’?